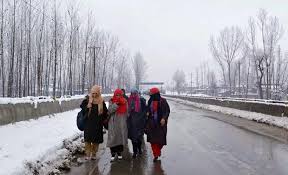 Mercury settles at minus 5.5 degree celsius in summer capital

Srinagar, Dec 22 (KNO): The night temperature plumetted further in Kashmir while Srinagar recorded the coldest night of the season yet again at minus 5.5 degree Celsius.

Several other areas including Pahalgam, Kokernag, Qazigund, Kupwara and others also recorded coldest night of the season.

Details available with the news agency—Kashmir News Observer (KNO) state that intense cold wave had tightened its grip in Kashmir as most parts of the Valley recorded sub-zero temperature.

As per the data, Pahalgam also recorded coldest night of the season at minus 6.8 degree Celsius.

As per the data Kupwara in north Kashmir also recorded coldest night of season at minus 5.1 degree celsius while Gulmarg, a famous ski-resort recorded a low of minus 5.2 degree celsius.

Pertinently, the 40-day harshest winter period, Chilla-i-Kalan has commenced in Kashmir while the weatherman has predicted intense cold wave amid persistent dry spell in the Valley.