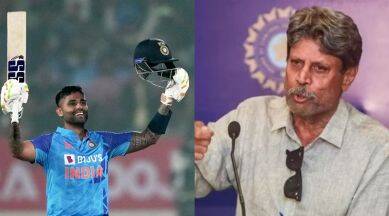 Suryakumar Yadav has been the talk of the cricket town for some time now. With 1424 runs across 44 matches, he was India’s second highest run scorer, despite only featuring in limited over formats. At 157.87, his strike rate was above and beyond any of India’s top order batter with more than three innings. More recently however, his third T20I hundred in less than six months time spoke tons of his impact in India’s T20 setup.

Among those going gaga over his batting is India’s first World Cup winning captain, Kapil Dev. The 64-year-old put Surya right up with the pedestal upon which greats such as Sachin Tendulkar, Ricky Ponting and Sir Vivian Richards stand.

“Sometimes I am at loss of words on how to describe his knock. When we see Sachin Tendulkar, Rohit Sharma, Virat Kohli, we feel someday there will be a player who will compel us to think he is also part of that list. There is indeed a lot of talent in India. And the kind of cricket he plays, that lap shot the one over fine leg, then that leaves the bowler frightened because he can stand and hit a six over mid-on and mid-wicket,” he told ABP.