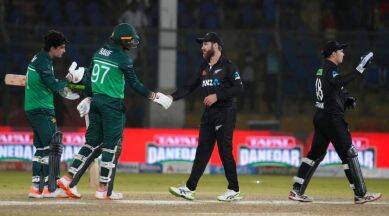 Devon Conway hit a brilliant 101 and captain Kane Williamson scored 85 before New Zealand lost nine wickets for 78 runs and got bowled out for 261 against the leftarm spin of Mohammad Nawaz (4-38) and fast bowler Naseem Shah (3-58).

New Zealand’s spinners strangled Pakistan on a turning wicket to win the second ODI by 79 runs Wednesday and level the three-match series 1-1.

Devon Conway hit a brilliant 101 and captain Kane Williamson scored 85 before New Zealand lost nine wickets for 78 runs and got bowled out for 261 against the leftarm spin of Mohammad Nawaz (4-38) and fast bowler Naseem Shah (3-58).

Williamson perfectly outmanouvred Pakistan on the wicket and included an additional spinner Ish Sodhi in place of fast Henry Shipley to bowl out the home team for 182 in 43 overs.

Captain Babar Azam fought the lone battle for his 79 off 114 balls before Sodhi (2-38) wrapped up the game by having Babar stumped through some smart glove work behind the wicket from Tom Latham, and No. 11 Haris Rauf holed out at long off without scoring.

We had Ish Sodhi, who has been bowling really well,” Williamson said. “We knew it would be a tough chase. We knew we had to get little bit out of the surface … and got to a par total in the end.”

Pakistan won the first match by six wickets and the teams will now meet in the series-decider on Friday at the same venue.

When the spinners came on, it was turning sharply,” Babar said. “The pitch in Karachi is always better in the second innings, but played differently today and the spinners were getting a lot more help.”

Earlier, Naseem yet again gave Pakistan a perfect start when he had Finn Allen dismissed in his first over. But Conway and Williamson showed lot of aggression against pace and spin with Pakistan’s fielders missing a number of chances.

Nawaz dropped a difficult return catch when Conway was on 29. Williamson was twice dropped in the space of Mohammad Wasim’s four deliveries soon after he completed his half century when first Haris Sohail couldn’t hold on to a sharp catch over his head at short midwicket and then Mohammad Rizwan dropped a low catch down the leg side as the ball brushed Williamson’s gloves.

Conway accelerated more after completing his half century off 57 balls and needed a further 32 balls to raise his hundred as both batters bettered New Zealand’s previous best second wicket-stand of 159 against Pakistan in an ODI shared between Williamson and Martin Guptill at Auckland in 2016.

But Pakistan came back strongly through Nawaz once Naseem returned and had Conway clean bowled with the ball that just moved enough to knock back the lefthander’s off stump in the 30th over.

Nawaz dismissed Daryl Mithcell, Latham, Glenn Phillips and also knocked back the top of Williamson’s stumps as he conceded just 14 runs in his last five overs and claimed four wickets. Mitchell Santner played a little cameo of 37 off 42 balls and helped New Zealand cross the 250-run mark before he got run out off the penultimate ball.

Pakistan couldn’t recover once it lost Fakhar Zaman and Imam-ul-Haq for only nine runs against Tim Southee and the pace of Lockie Ferguson, who beat Imam with a 152kph short-pitched ball and had him caught off a top-edge.

New Zealand spinners Michael Bracewell (1-29) and Santner (1-34) then got plenty of assistance off the wicket and didn’t allow even the experienced Babar to score freely before Pakistan got bowled out with seven overs to spare.