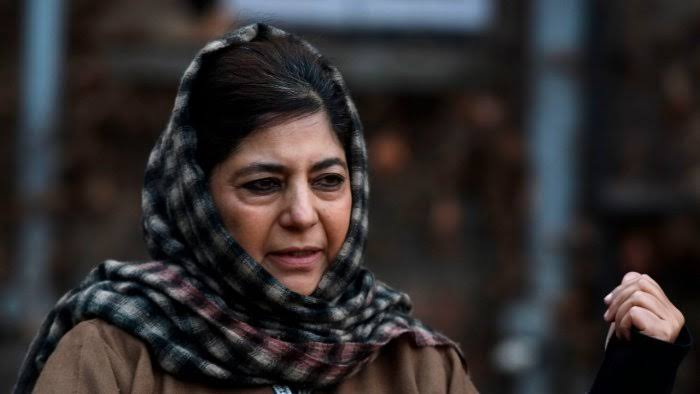 Srinagar, Dec 28: The government has totally failed to control militancy in Jammu and Kashmir and the militancy now spreading to the Jammu region is its “biggest failure”, PDP chief Mehbooba Mufti said on Wednesday.

She said the encounter in Jammu’s Sidhra area in the morning, where four militants were killed, belied the government claims of uprooting militancy in J and K.

“The government claims that it has uprooted militancy from J-K. But, today, there is militancy even in Jammu which is its biggest failure,” Mehbooba told reporters here.

She said it was disappointing that the militancy has spread to the Jammu region now.

“They (government) have totally failed to control militancy,” she added.

The PDP chief also claimed that the government might make excuses like Covid or militancy to stop the Congress’ Bharat Jodo Yatra in the Union Territory.

The former chief minister said democracy has been “suspended” in J-K.

“The fundamental rights of people like the right to express yourself (has been suspended). If anyone talks, he is arrested, be it a journalist or a common man. Politicians are pressured through the ED or other agencies and they are facing difficulties in playing their role,” she said.

On the Bharat Jodo Yatra led by Congress leader Rahul Gandhi, Mehbooba said it was compulsory and “our duty” to stand with someone who is out there to “save” democracy and secularism.

“A person is standing and raising his voice against the communal forces who are trying to divide the country, destroy secularism, and destroy the democratic setup,” she said.

J-K has the utmost belief in secularism and democracy because when in 1947 Hindus and Muslims were getting killed in India and Pakistan, Kashmir was the only place where Pandits, Sikhs, Dogras were protected by the Kashmiris, she said.

“That is when (M K) Gandhiji said he can see a ray of hope from Kashmir. When there are attempts to destroy secularism in the country, the people of J-K face its maximum brunt. We acceded to India even as we were the single Muslim-majority state, because it was a secular and democratic country for which Gandhi ji sacrificed his life,” Mehbooba said.

“So, it is our duty that if a person has come out to save the country’s democracy and secularism, its Ganga-Jamuni tehzeeb, then standing with him is compulsory,” she said.

On being asked that on one hand, her party was demanding restoration of Article 370, which was abrogated by the Centre on August 5, 2019, but on the other, she was supporting the yatra of the Congress party which “supported” the government’s move, Mehbooba said the two issues were separate.

“Joining yatra is for saving democracy and secularism in the country. Our fight is separate and we will continue to fight that,” she added.

The PDP chief also condemned the ban on girl education imposed by the Taliban in Afghanistan.

“Seeking education is in our Islam and if there is anyone who tries to use the name of Islam to work against the religion, then we condemn it,” she said.

While welcoming the statement of J-K LG Manoj Sinha that killings of Kashmiri Pandits in the valley should not be communalised, Mehbooba said he should give that lesson to the BJP.

“It is better late than never, because it is the BJP government which communalises the unfortunate killings of Kashmiri Pandits. They made a film (Kashmir Files) on it and then showed it everywhere.

“They are trying to create hatred between Kashmiri Muslim and Kashmiri Pandit communities. It is good that he (Sinha) said it, but, I think, he should give this lesson to the BJP,” the PDP chief said.

She alleged that J-K has been turned into an open-air prison where “no one is allowed to say or express anything”.

“Jails are filled with the people from J-K. Our youth are beaten in the colleges outside. The BJP has ruined the atmosphere in the country,” she alleged.–(PTI)