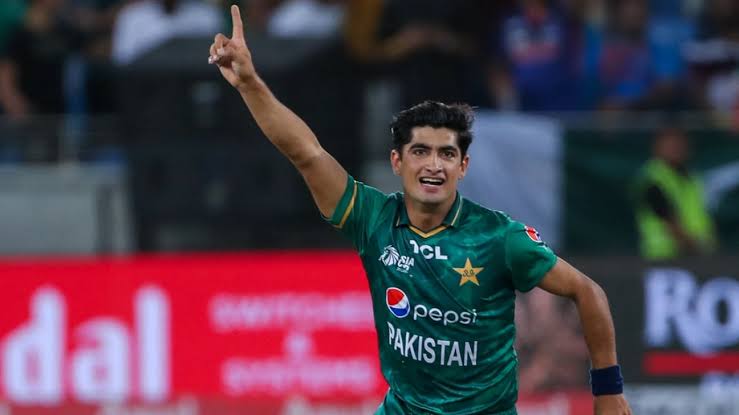 Naseem Shah took his second five-wicket haul in ODIs to ensure New Zealand were restricted to 255 for 9 in their 50 allotted overs in the opening ODI of the three-match series against Pakistan in Karachi. Leg-spinner, Usama Mir, making his international debut, also played his part by picking up a couple of wickets.

Pakistan, who opted to bowl, started on the right note when Naseem castled Devon Conway with a near yorker in his very first over. Finn Allen, his opening partner, was given out LBW in the very next over but got it reversed via the DRS. For a while, Allen put the pressure back on the opposition with a mixture of pulls, drive and the flick. In fact, in just nine deliveries, Allen collected as many as six boundaries.

Eventually, Wasim jnr dismissed Allen; the opener mistiming an attempted drive to Agha Salman at covers, who pouched an excellent catch. Just when Kane Williamson and Daryl Mitchell seemed to be taking New Zealand to safer waters, Pakistan again struck with Usama bowling a peach that pitched around leg and turned appreciably to clean up the batter.

Tom Latham, who replaced the New Zealand skipper, then showcased his skills against spin by blending the occasional pull and reverse sweep with singles and twos to keep the scorecard ticking over. But Pakistan were able to find a breakthrough at the right time with Mitchell falling to Mohammad Nawaz. Usama followed it up by dismissing the set Latham for 42.

At 147 for 5, Pakistan would have hoped to restrict New Zealand to a score lesser than they eventually ended up with. But Glenn Phillips (37) and Miichael Bracewell (42-ball 43) stitched a crucial alliance of 66 to prop up the visitors. At 213 for 5, Phillips was dismissed by Naseem’s back of a length delivery, with the middle order bat pulling the ball to the fielder stationed at mid-off. Naseem continued to make inroads as he removed both Bracewell and Henry Shipley in a single over. Lower down the order, Mitchell Santner and Tim Southee chipped in with some useful boundaries before Naseem dismissed the former in the final over to finish with five wickets.

The pitch is on the slower side and the tourists would feel they are still in the game.