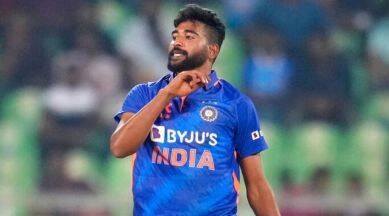 India pacer Mohammed Siraj on Sunday said the beauty of bowling with a wobbled seam lies in its unpredictability.

So much so that he even doesn’t know how much the ball will do after pitching. Siraj has been reaping the benefits of bowling with a wobbled seam since he discovered the art in 2018.

He picked up nine wickets in the ODI series against Sri Lanka, providing India the much needed wickets with the new ball.

“With wobbled seam, how much the ball will do neither I know nor the batter. Sometimes it goes straight after pitching other times it can come in sharply. Most of my wickets come through wobbled seam. It is effective for me and I trust it to work for me,” said Siraj after the third ODI.

The skillful pacer said he used the wobbled seam after his natural inswinger deserted him.

“Inswing was my natural earlier but then it stopped so I also developed outswing. When I did not have the inswing, I developed the wobbled seam. It took a lot of time to get effective and give me confidence. The more I bowled in the nets, the better I got. In the IPL, I spoke to Dale Steyn as well for outswing which helped me a lot.” Siraj is getting success in all the formats and feels it is all about execution of line and length.

When the IPL season went bad for me, I started focussing on white ball cricket. I worked on it and grew in confidence. I stopped worrying about how my performance would go which was not case earlier. I started focussing only on execution of line and length.” Talking about the Sri Lanka series, he said his plan was simple.

The plan was to take early wickets and put pressure on the opposition.” Siraj is now looking forward to playing at his home ground on January 18 when India take on New Zealand in the first ODI.